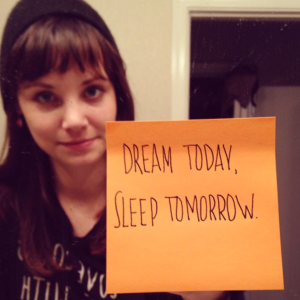 one of my best friends, mike lawson, told me about how easy it is to give up on an idea if you allow yourself to get credit for it too early into it’s development. he said, ‘as soon as i tell someone about it, i am way less likely to actually do it.’

when i have an idea, i (without hesitation), seek validation.
i want confirmation that the idea is solid before moving forward.

after all, who wants to put a TON of effort toward a no-good-stoopey-poopey idea?

BUT, what mike brought to my attention made me question what motivates project ideas that pop in the ol’ noggin. am i wanting to do it because of the recognition i will get for doing it? or am i driven by a hope to actually change something?

next time i feel compelled to share my recent idea (err, right now), i’ll hold back deny the confirmation and satisfaction that may have returned the idea had i shared.

holy smokies, does that even make sense?

if this idea comes closer to being actualized, i’ll have a thread of evidence and can continue testing my motivations by sharing at various stages of idea-development.

if you have ever brought an idea to fruition, when did you start sharing your progress and how do you think it effected the outcome of your idea?

3 thoughts on “just around the river bend”