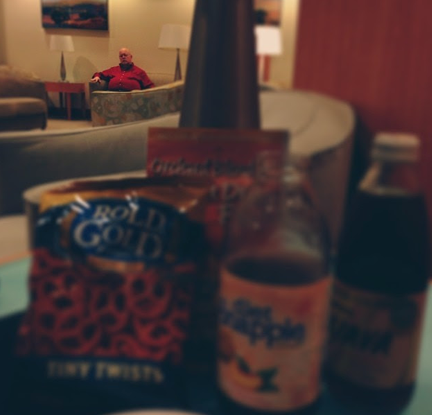 it’s the stillness of an empty hospital waiting area that brings me to tears for the first time since grabbing jesse’s hand when the doctor uttered the words, “you’ll be admitted.”

at that time, both jesse and i equated the words to dollar signs.

how could we afford this? would his insurance cover the expenses or would he be going into health debt before entering the debt maze of medical school?

i feel a slight sense of shame for this, but what got me caught up then was the notion that we could no longer afford the vacation we have been planning. i was swelling with sadness that we wouldn’t get to take the month of may off and get lost in the beauty and stillness of the west coast together before taking the big life leap that comes with jumping states and embarking on a new chapter for the sake of partnership.

we’ve had our gloves up in the air, yearning for the chance to catch a break.

beginning to feel like a victim, i have to back track. i’m not the one in the chair, he is.

my thoughts begin to shift. i become present.

back in the waiting room.

there is a man to the right of me, across a sea of empty chairs. he is a big man, wearing a nice red shirt and a large ring. i sit here with him in this stillness. waiting. wondering. hoping.

i look at him and i see a man, trying either to or not to sleep. i wonder if he is tired, or just trying to make the time pass faster. just as i begin to imagine how he is feeling and whom he is waiting for, a nurse comes out to him and says, “your wife wanted me to tell you that she has about three hours of surgery and so you should eat something, okay?” he grumbles with a slight nod.

with only that, i feel connected. i feel glued to my seat. right there with him. waiting. seeking news like it’s my life on the line.

i wipe my face clean of make-up strokes and consider everything in it’s right place.

1. jesse was laid off two weeks ago. he has time to recover.
2. his insurance lasts until march 31st. he has coverage to be healed.
3. he has a 6k out of pocket max, which is relatively small compared to the 200k bill he will be expecting.
4. i’ve been able to stay with him every night
5. he has an overwhelming number of friends and family members coming in to support him
6. we have online friend support to top it off
7. we have each other

i look back to the man in the red shirt and wonder if his way of coping leaves him without hunger and am thus reminded of my own. so i get up from behind the veil of the screen, and make my way to the cafeteria. i buy myself a bag of pretzels, some dried fruit, a cookie, and two kinds of iced tea.

i buy him a sandwich and a bottle of water.

without being able to muster up the courage to speak, i hand him the sandwich, walk away, reclaim my chair and pull back up the screen.

i let the tears fall again as i sit down, and from across the sea of empty chairs break bread with a perfect stranger.

in this moment, a tiny smile, or at least the feeling of a smile creeps up and i sense the relief.

waiting, wondering, hoping, with someone else, makes it all a little easier.

together knowing, everything will be good again soon.

SIDEBAR: Jesse is doing very very well. He had a small pneumothorax for the second time on Monday night and was admitted to the hospital for observation. After being administered O2 for 24 hours, and not seeing improvement in x-ray or CT scans, Jesse was seen by the main thoracic surgeon here at John Muir Hospital. Jesse is expected to have what is called a bleb. 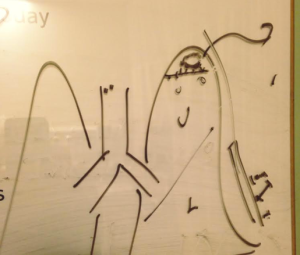 It is a piece of lung tissue that looks similar to bubble wrap. A bubble can pop under physical stress and that is what the doc thinks caused the pneumothorax to begin with. The surgery will remove the bleb section of the lung tissue and staple the top of the lung back together.

Here is the drawing the surgeon made for us, which unintentionally ended up looking like a very happy lung:

Jesse is currently in surgery and I’m sitting in the waiting (and writing) room right now. I will post an update when I can after Jesse gets out. I am fully expecting him to recover with ease and come out stronger than before.

UPDATE! (2/26/14) – Jesse is out of surgery and in the recovery room! He is expected to be awake very soon and back in his hospital apartment room within the hour. I can’t wait to see him and all the funny things he will probably say while woozy from the anesthesia. More updates as they come. Bonus: There are a bunch of pictures of Jesse’s insides that I am going to frame and hang in my house. #winning

Update!!(2/27/14)- Jesse was hilarious coming out of surgery last night. As he was wheeled in he said, ‘the hero has arrived’ with his usual joke telling tone. It wasn’t an easy night, nor a restful one, but it did come with a lot of improvement. This morning Jesse got a plate full of yummy breakfast food, ate the bacon first and then shared that he felt like he had just had a thanksgiving dinner. He is asleep now and feeling good. 🙂 so all is well and on schedule. He should be ready to go home tomorrow night or Saturday morning.

19 thoughts on “faces come out of the rain”